Jakob’s Wife starts off fairly strong, but with Anna’s transformation, it ends up waning with an ending that feels rather impotent.

Jakob’s Wife follows Anna, a dutiful housewife to a minister. She spends her days cooking and cleaning, but wishes for more from life. Constantly interrupted by her husband, she seethes with cold rage while she watches him brush his teeth or sleep. Her husband, completely unaware of this, continues to expect the subservient wife.

When an old flame rolls into town, she goes to meet him under the guise of discussing renovation. Tempted by him, she manages to stay faithful to her husband. However, rats and a mysterious looming figure have plans for Anna. Soon she is transformed into a creature of the night, feeling more alive than ever. But as the bodies start to pile up, can the minister save his wife?

Jakob’s Wife is a horror-comedy in spirit if not in design, with the first part staying on the creepier side of horror. We get missing women, and then murderous rats, and oh so much blood. Barbara Crampton is fantastic in this first part, playing the quiet wife with a turbulent ocean of emotions below the surface. When she stands on the stairs after being attacked, with her back to her husband, the silence could be cut with a knife.

They set the stage for the relationship in this film very well in a short amount of time. Not feeling sympathy for Anna would only be able for the very most cold-hearted of humanity. Even when she has a brief dalliance with her former lover, judgement is pushed aside, just to see Anna feel something other than despair. Which makes her transformation into a confident woman even at the cost of many lives, seem so gratifying.

Jakob is not wholly without some sympathy. He is not an abusive husband, just a partner that seems to not see his wife. Jakob and his wife, Anna, have fallen into a deep rut, where every day is the same and they no longer actively love one another. However for me, personally, I was still rooting for Anna to leave her husband. Seeing her become a new woman, and having Jakob not exactly accepting of the new confident her, even to the very end, Jakob felt more like the bad guy than “The Master”.

The rest of Jakob’s Wife follows a more comedic tone. With Crampton and Larry Fessenden, sticking on the right side of hamminess for the film. We have several neck blood spurting scenes reminiscent of Dracula: Dead and Loving It and many other older horror movies. But they were never executed in a way that garnered any laughs from me. Even though the latter half of the film feels like comedy horror, it is not clear if that is the effect they are going for.

Listed as a horror or horror thriller, it is easy to be perplexed by the direction of the film.

Though this is a horror about vampires and blood lust, the main focus of the film is women and how they can be repressed by society or their safe choices in men. Anna experiences mini enlightenment where she feels not only more like herself in years but also sexually awakened.

That is why I found the ending even more perplexing. With a final showdown between the police and the master, I felt we were going to get a very feminist ending which I would have delighted in. Especially since it spins conventions on its head with the master vampire being a woman. However, everything largely remains the same for Anna. Though she has changed, her husband is not exactly accepting of these new changes. There seems to be some hope that even if Anna had not gone completely to the dark side, that there would have been a bit of a reconciliation between her and Jakob. But it largely ends how it began, except Anna is a bloodthirsty monster.

Jakob’s Wife is Travis Stevens’ second feature film as a director, having been a producer on a variety of different genre films, but most notably for horror fans – Cheap Thrills. This movie does show some potential for Stevens’ in the director seat at least in horror, but much more risk-taking and focus is needed in future projects to make him a name to recognise in the field.

Jakob’s Wife does have its fun, creepy and endearing moments, but in the end, there is just a lasting feeling of frustration at what it could have been.

Jakob’s Wife is available to stream on Shudder. 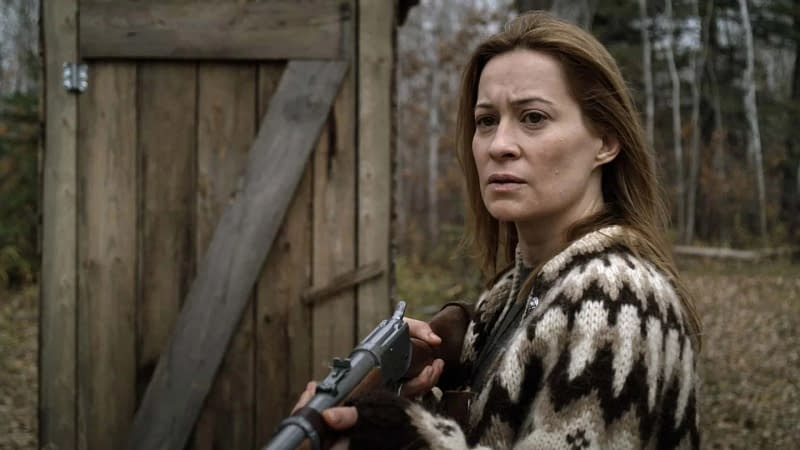