Altered is perhaps the best horror movie that I’ve seen so far this year. With its brilliant characters and terrifying monster visuals with a side of body horror – this is a film I wholeheartedly recommend. Considering Altered is a low budget production set in a single location, this is no mean feat to be able to achieve that level of praise from myself.

From the director of The Blair Witch Project, Eduardo Sánchez, comes a story about alien abduction and the lingering effects it has on the victims. Altered follows a group of friends who have lost contact after an alien abduction in their teenage years. Wyatt, the abductee who experienced the worst of the experiments, has now become a loner, severing all ties with his past. However, fifteen years later, his former friends are seeking revenge on those aliens, and Wyatt finds that he must face his demons when his old friends come knocking on his door in the middle of the night.

There are a lot of positives with this film, and I have to stop myself from gushing about it, as I was super impressed with it. Altered managed to suck me in, so much so that from within the first few minutes, that when someone tried to get my attention in the room, I jumped out of my skin! It is not just jump scares that get your attention in this film, but the oppressively tense atmosphere that you just cannot take your eyes away from.

Not only is Altered a good creature feature, but it is an intense drama as well. The characters and the acting was absolutely superb. In the first half an hour, through conversations between the characters, we are given an overview of their relationships and their past harrowing experiences. There was no need for any flashbacks which can pull you out of the experience, they did it all with dialogue. I would suggest this is a perfect example of how to introduce and develop characters in a very subtle and relaxed approach.

But it just wasn’t the character development in Altered that was good, I found myself feeling for a lot of the characters. They all have different approaches to deal with the situation, and even though some of it was foolish or hot-headed, it was believable and made sense with their character’s arc. It would have been easy to go for cliché characters, but they manage to have taken their archetypes and enriched them. Most of the characters were redneck types aside from our protagonist, but they did not take the lazy approach to make them dumb. There was real grief and fear that was driving their actions, and you could really feel that along with them.

Even the most antagonistic member of the group, who was quite unsympathetic in the beginning due to his gung-ho approach to anything he deems dangerous, had depth and generated a bond with the viewer. They manage to really convey that this was brought on by fear and grief rather than sheer asininity. And later on, due to unforeseen circumstances, his plight is even more sympathetic. It takes a good and/or experienced writer to make you feel for a very unlikeable character. And that is what is so great about Altered, that they did not waste any moments on filler, every scene and moment was not only there to terrify but also developed the characters and played on your emotions.

Perhaps the most intriguing character throughout Altered is Wyatt. Wyatt, as stated, is a reluctant participant in this drama, having had his hand forced to deal with the alien. Due to the other characters’ fear or anger, he becomes the de facto leader, forced to make harrowing decisions and keep everyone safe even when they don’t listen to reason. He is just as traumatized as the rest of them, but rather than seeking revenge, he has retreated from the world. Through various bits of dialogue, they show how he was the most affected by the previous experiments conducted on him. There is quite a bit of nuance to his character, with his trauma on display, his absolute fear of the aliens, but also his courage to face it.

Now regarding the alien in Altered, you will not be disappointed with the special effects at all. I found this creature to be truly terrifying. Its form, though reminiscent of the traditional grey aliens, was much more pronounced and detailed with its green skin and nightmarish teeth. And they really build on the horror slowly revealing the creature bit by bit until the final money shot. At first, you get only glimpses of the creature, hidden under a tarp, strapped with chains and a welding mask covering its face.

It does not disappoint when its full profile is finally shown, somehow becoming even more disturbing to behold, which often is not the case, and should rightly be admired. It wasn’t just visuals that helped create this scary monster, but the high levels of intelligence and superhuman strength on show very much increase the fear element. This was not a creature to be messed with. However, I did find one part about the alien that was a bit jarring in Altered. When it was revealed, its size seemed different to when hidden – this, I suspect was caused by budget constraints on the special effects, and while noticeable, only pulled me out of it for a moment.

It is not only the creature that gives us some horror effects, the characters have a few scenes in which their injuries and other maladies look utterly gross and quite realistic. So much so, that it was sometimes hard to look, but this just added to the weight of the dire straits they were in. We also get treated to a bit of body horror at the end, where one character is influenced by the alien, leading to bone-breaking consequences.

Thankfully, Altered manages to keep the tension high right until the explosive end. Though not exactly original in its approach, it was different enough to make it interesting and quite unexpected. This feels like one of those movies that would be ripe for sequels, but it is complete enough in its own right.

Altered is what all horror fans want from creature features – great monster effects with tense and harrowing atmosphere. 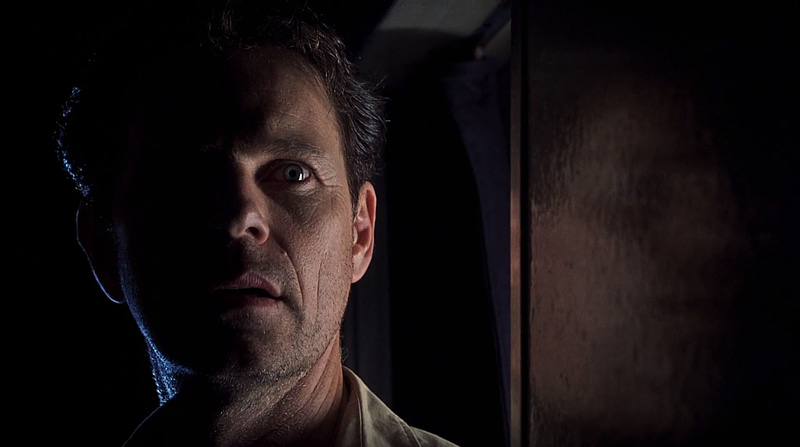